It is time to transform governments from 19th-century mindsets and silos toward 21st-century structures and systems. This transformation has the potential to shift hierarchical, siloed government systems of the past into interdependent, interconnected, neural-like systems, with long-term value ing

The Corona pandemic has provoked an imperative sense of urgency across the world. In response, some governments embraced the opportunities which emerged, while others were less. So, to better address the world’s most pressing systemic challenges, it is time to transform governments from 19th-century mindsets and silos towards 21st-century structures and systems.

The outcome so far is a thought experiment in designing a symbiotic government. This series of articles will address each of the why, the what, the how, and the who of this transformation, to better introduce the concepts and open the conversations to further development and execution.

Ministries are the cogwheels of government, and by default set to operate in a linear way. They are linear in their decision-making, with checks and balances of bureaucracy ultimately slowing down the processes. Ministries are also linear in their resource allocation, leveraging the ‘or’ philosophy, for example, spending on economic growth OR preservation, defense OR education. Yet, by forcing us down single pathways, we run the risk of eliminating numerous possibilities and alternatives.

Missions on the other hand are instruments for non-linear thinking, and by design, they embrace the nonlinear ‘AND’ philosophy (i.e. valuing economic growth AND preservation; valuing defense AND education). A mission is not a strategy limited to five years, nor a plan constrained to one or two years. It is a visionary purpose, with a clear, long-term aspiration, addressed across time (10+ years), such as eradicating hunger, the colonization of Mars, or the internet for all. Professor Mariana Mazzucato portrayed missions as dynamic interactions within an ecosystem; comprised of aligned ambitions and objectives; alongside coordinated economic, societal, and technological aspirations.

Missions-thinking has been applied to activate a mission-oriented government in Estonia, for tackling "wicked problems"; and in the UAE, the government is experimenting with shifting mindsets across the Cabinet - from striving for “strategies” to aspiring for growth missions. Missions-thinking also has the potential of being embedded deep within the design of a government system – enabling a symbiotic government.

A symbiotic government can be more adept at addressing ‘wicked problems’ holistically, with systems operating as interrelated constituent parts. One proposition would be to design this new system based on clusters of shared purpose (note the image below). Similar to how each of the brain lobes has specific focus functionalities, each cluster would be characterized by a specific overarching theme – such as ensuring fair and equal prosecution under the ‘Missions for Justice’ cluster. This allows for concentration within a specific domain of expertise. 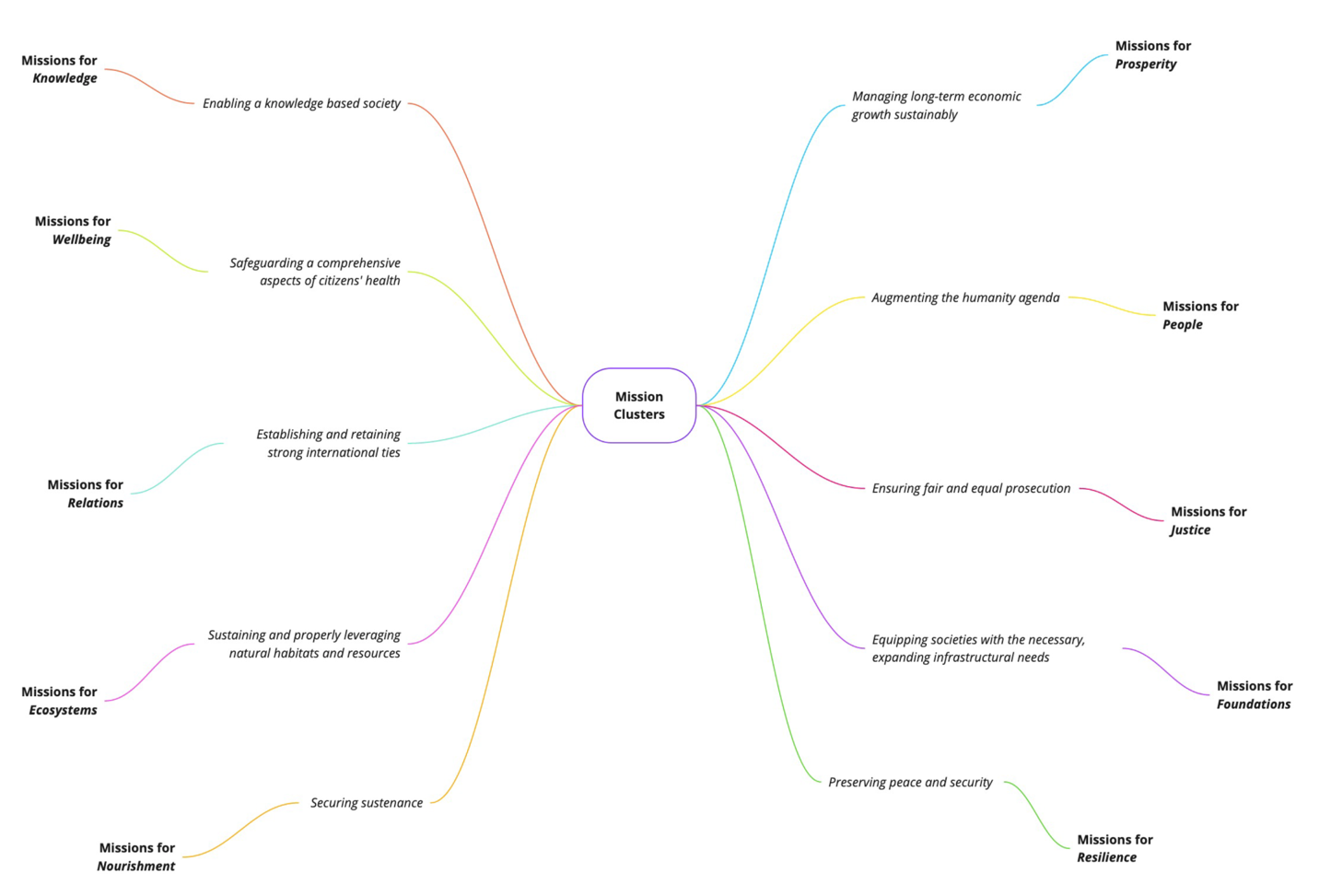 Each cluster is then home to a set of clear and measurable missions, such as ‘1 million high-tech entrepreneurs by 2030’ under the ‘Missions for Prosperity’ (Image 2). Each of these individual missions will be led by a specific set of expertise and supported by the whole government to ensure success.

This transformation has the potential to shift hierarchical, siloed government systems of the past into interdependent, interconnected, neural-like systems, with long-term value ingrained deep within their design. Our world is prone to face many more dilemmas and crises, from climate change to the 4th Industrial Revolution, and these afflictions cannot be deciphered separately, validating the need for a symbiotic government.

Why the Public Sector Must Modernise Procurement